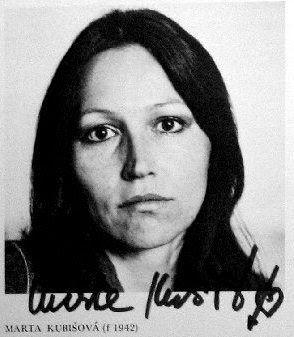 In May 1978 a Swedish team from a little record company in Stockholm "Oktoberförlaget" arrived in Prague. The reason was the meeting with several forbidden by communists artists in Czechoslovakia and recording a whole album with them. The recording session was held in the kitchen in the flat belonging to one of the singers Jaroslav Hutka in the Neklanova Street in the part of Prague called Vysehrad. The compilation entitled in Swedish "Lämna vårt land i fred" (Leave our country alone) had even a subtitle: "Forbidden singers of the second culture". Marta Kubisova performed totally 6 songs on the album featuring "The Prayer for Marta" in short version of 40 seconds.


The album was mixed in the ABBA studio - Metronome - in Stockholm in the summer 1978. One more historical event the same year was recording of a video with Marta in Prague.

The rights to the album were bought later by the couple Pallas in Czechoslovakia who established record company Safran'78.
The album is impossible to find nowadays - probably the most unique release containing Marta's songs.